Why Climate Change is Important to Our District

While climate legislation targets reductions in greenhouse gas emissions statewide, these policies benefit our district directly. In other words, our efforts in Getting to Zero — which means getting California to net zero greenhouse gas emissions — not only protect the planet, but also protect the health, well-being, safety and homes of our families and neighbors right here on the Peninsula.

For us, taking action to reduce emissions means reducing the number of lives lost, and homes and infrastructure destroyed, due to the pre-existing climate risks in our district.

The Paris Climate Agreement and the Air Resources Board Scoping Plan aim to reduce greenhouse gas emissions and prevent the global temperature increase to “well below” 2° celsius above pre-industrial levels. Accomplishing these goals by Getting to Zero would have several direct and measurable effects on our region: 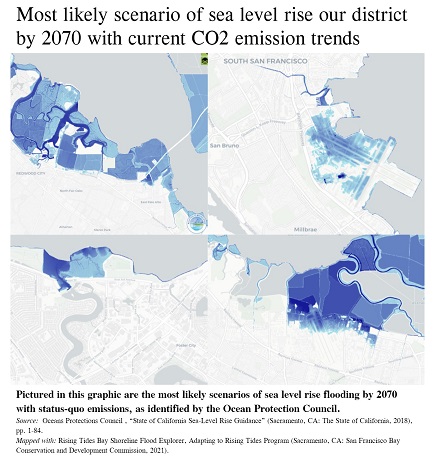 Sea level rise. Carbon emissions cause an increase in water temperature and a rise in sea levels, which leads to flooding. Currently, data from the National Research Council estimates the most likely scenario in our district to be 3.3 feet of sea level rise by 2100.

Yet, if the world were to meet the Paris Climate Agreement temperature goals by reducing global emissions, the Ocean Protection Council estimates this change could be the difference of up to 2 feet of sea level rise in California in the next 130 years. This could mean saving dozens of neighborhoods’ at-risk homes and businesses in three-quarters of the cities in our district.

Wildfires and air pollution. Higher carbon emissions accelerate climate change, which sets the stage for more wildfires. If we reduce carbon emissions, it lessens the likelihood and severity of wildfires, such as the 2020 CZU Lightning Complex fire in San Mateo County, and reduces the subsequent adverse short- and long-term health impacts of smoke pollution on health, which are still not fully understood. CZU burned 86,509 acres including the beloved Big Basin Redwoods.

Heat risks the health and lives of vulnerable populations. During two heat waves in 2017, 14 people in San Mateo and neighboring Bay Area counties were killed from extreme heat. Preventing carbon emissions from accelerating temperature change and fluctuations saves vulnerable people (such as the unhoused, elderly and children) from heat-related deaths and illness, whose mortality risk increases from rapid temperature increases.

The severity of the most recent heat events in the Pacific Northwest would have been virtually impossible without the human impacts of greenhouse gas emissions, according to a World Meteorological Association report.

Devastating drought. Carbon emissions are predicted to cause longer and more persistent drought conditions, intensified rainfall events (and subsequent worsened flooding), worsened insect and disease problems from hotter temperatures, and more adverse impacts. In the drought period between 2010 to 2016, estimated economic losses from drought statewide were $2.1 billion with 21,000 jobs lost, including our district members employed in agriculture.

Beyond these introductory impacts on our district, carbon emissions will also likely impact the vulnerability and reliability of the electric grid and public transportation projects, the feasibility of wine production by local farms, the sustainability of wetland ecosystems, and the existence of wastewater treatment plants, which are disproportionately located near coastlines, and many more undetected or unpredicted outcomes in our district.

Climate policy for healthy neighborhoods. The benefits of reducing carbon emissions in California extend to saving our neighbors’ lives, homes and infrastructure and the well-being of those nearest us. While Getting to Zero will largely be accomplished through statewide policies and partnerships, the impact is local. We want to protect our neighbors and their families from the adverse impacts of carbon emissions. We can lessen that impact if we work to reduce emissions at a quicker pace.