Investment Funds Join the Fight for Getting to Zero

This year, there have been a couple of big shifts in the fight for a clean energy future within the world of finance. 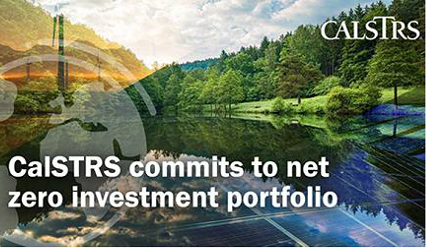 Earlier this month, the California State Teachers’ Retirement System (CalSTRS) committed to achieving net zero greenhouse gas emissions among all the companies that are included within its investment portfolio by 2050 or sooner. As the nation’s second largest public pension fund, with $310 billion in assets under management, this is a momentous decision. If you are a business that wants to be considered investable by one of the largest asset managers in the world, you’d better have a plan to become a net zero company within that time period. That will get CEOs’ attention!

And just a couple of months ago, we had an even bigger earthquake in the investment community. Engine No. 1, a small, California startup activist fund, shook the world when it succeeded, for the first time in industry history, in winning its improbable hostile proxy fight against a major oil company. And not just any oil company, but the biggest, most recalcitrant, climate foot-dragger of them all: Exxon Mobil. Exxon, whose lobbyist was recorded by Greenpeace explaining how Exxon has been secretly fighting against climate action, viewing their support for a carbon tax as a “talking point” that they don’t expect to ever happen. Then this spring, Engine No. 1 swept endorsements from shareholder groups, pension funds and the big equity holders, by insisting on a new era of transparency, accountability, capital reallocation away from drilling, and a strategy for a clean energy transition. They now possess three seats on the company’s 12-member board, marking the first time that candidates picked by the company’s management lost an election.

CalSTRS also had a leading role in this big event, as an early and decisive catalyst in Engine No. 1’s campaign. According to Andy Karsner, one of Exxon’s newly elected board members, “CalSTRS was an indispensable early partner, publicly and boldly voicing support.”

CalSTRS was followed soon after by CalPERS, the even larger pension fund which manages retirement savings for all of California’s other public employees. Together, CalPERS and CalSTRS have $750 billion under management. CalPERS also happens to be one of the largest investors in Exxon. They encouraged other members of Climate Action 100+, a coalition of investment firms representing $54 trillion in assets under management who have pledged to “ensure the world’s largest corporate greenhouse gas emitters take necessary action on climate change,” to support Engine No. 1’s candidates. When investors representing that much money demanded change, Exxon was forced to listen.

What is going on here? Why did the investment community suddenly wake up and start to care about the climate crisis?

Today, climate risk is business risk. They are inseparable, and investors everywhere are starting to notice. A company whose business plan cannot adapt to the changing political and meteorological realities of climate change is a company whose prospects look pretty dire to long-term investors.

That was Exxon’s mistake. It’s industry-lagging performance correlates to its unwise reluctance to recognize where the world is inevitably headed. The International Energy Agency recently released its roadmap to reach net zero by 2050, which stated that “there is no need for investment in new fossil fuel supply in our net zero pathway.” Yet Exxon had prepared no strategy to adapt to that future and inspired no confidence amongst shareholders that it would. Engine No. 1’s campaign to elect new board members didn’t focus on the moral argument for Exxon to do its part to prevent climate change. It focused on reforming Exxon as a business that needed to adapt to a low carbon future to generate future profits. It called for “spending and pay cuts, a board shake-up, and a shift to cleaner fuels that it described as existential for the oil giant.”

Investors have started to wake up to a vital question: how can we believe that our energy system must change dramatically to avert a climate crisis and yet, at the same time, stay invested in companies that have no plan for adapting to that change?

The time for saying one thing and doing another is over. Smart money should be backing companies with a transparent, published strategy and plan to meet measurable decarbonization milestones. While we can divest from those companies who refuse to face reality, we now also have a playbook for how to use investment leverage to force companies to change.

Pension funds like CalPERS and CalSTRS and asset managers like BlackRock are starting to realize that evaluating climate risk is an essential part of their fiduciary duty to protect their clients’ savings. When market attitudes shift like that, companies are forced to pivot or face rapidly declining prospects. Money talks — loudly. And first-movers tend to avoid being the ones holding the losses. Who wants to be invested in the next Kodak or Blockbuster, companies that self-destructed when they failed to adapt to a new reality? When market sentiment changes, it can change very fast. Climate laggards like Exxon should be very concerned, and so should anyone invested in them.

In the Senate, my colleagues and I are fighting every day to advance forward-thinking climate policy to Get to Zero. But collectively, success depends on an all-sector, all-hands-on-deck approach.  This means supporting clean energy legislation but also focusing the investment industry’s massive influence on forcing companies to address climate risk with urgency and transparency.

I applaud the forward thinking of California’s pension funds and the efforts of Engine No. 1 and the many members of Climate Action 100+ who have stepped up to make companies take the clean energy transition seriously. They are not just doing the right thing for the climate. They are also doing the right thing to protect the retirement savings entrusted to them.

How can we build upon this momentum? Our long term economic and financial health, as well as our climate and environmental health depend on it. As Exxon belatedly discovered—they’re inseparable.