Can California Achieve Zero-Carbon Electricity by 2045? The Data Says ‘Yes’

Since Getting to Zero depends heavily on switching much of our energy use to zero emission electricity, it is important to ask: Can we get statewide electricity to zero emissions? Many people with whom I’ve spoken (including some Democratic legislators) are worried that we can't do it or that it will cost way too much.

We can’t let these fears hold us back. Fortunately, the data shows us that getting 100% of retail sales of electricity from clean sources by 2045 is possible and achievable without a significant increase in cost. In this blog post, I want to share some research that demonstrates electricity decarbonization is not only feasible both statewide and locally, but that it also can be done with relatively low incremental costs relative to previous trends — even while handling the added loads from the electrification of homes, commercial buildings, and vehicles — and will improve public health and provide jobs benefits.

So, what should we tell people who are worried that Getting to Zero for electricity cannot be done or cannot be done without sacrificing reliability? The experts believe it is both achievable and not even all that expensive. Some key takeaways from the research, on which I will further elaborate subsequently, are: 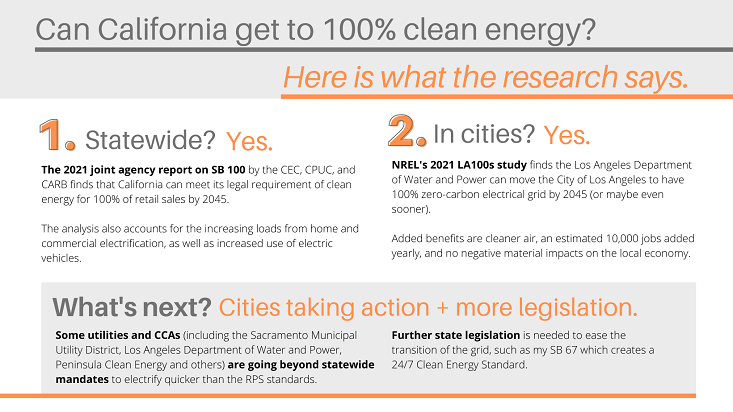 1. Statewide grid decarbonization is possible (by 2045 for retail sales of electricity).

Foremost, key state agencies have determined that grid decarbonization is possible in California by 2045. Senate Bill 100 (2018 De León) established a target of using only electricity from renewables and other zero-carbon sources for 100% of retail sales by 2045. (It’s important to note that “100% of retail sales” omits emissions from ~10% of the electricity that is used to run the grid itself or lost in transmission, so we must still work to have targets reflect true emissions.)

The joint agency report on SB 100 — developed January 2021 in collaboration by three of the most important state agencies for energy planning, the Energy Commission, the Public Utilities Commission, and the Air Resources Board — shows that this target is achievable (and will be even easier if the cost of renewables, clean-energy tech innovation, storage capacity and load flexibility improve faster than predicted). These estimates account for the increased electricity load that will result from the state's future goals for electric vehicle expansion, home and commercial electrification, and flexibility and reliability planning. While getting all the way to 100% will not be free, this scenario would cost only 6% more than the core SB 100 scenario (in which 10% of electricity generation is still being provided by gas plants).

The report also analyzes a true 100% clean electricity scenario (the “expanded load coverage” study scenario) that goes beyond what is required by SB 100, and finds a feasible path to that, as well.

In addition to testing state-wide grid decarbonization, the feasibility of city-wide grid decarbonization, with high reliability, has also been found to be possible. A city level grid transition to clean electricity has been analyzed extensively by the National Renewable Energy Laboratory (NREL) for the territory served by the Los Angeles Department of Water and Power (LADWP). NREL’s LA100 study found that the City of Los Angeles can get to a (true) 100% zero-carbon electrical grid by 2045, or possibly even sooner.

The study modeled three scenarios for getting to 100% clean electricity, with one achieving this target by 2035, as well as a scenario that only gets to “100% of retail sales” in 2045 (as required by SB 100). All scenarios were thoroughly tested for reliability and resiliency using 7 years of weather data and simulating unexpected losses to transmission lines and generation resources. The resources chosen for each scenario were required to meet those stringent tests for reliability. The NREL study, using the most sophisticated models ever developed to study grid decarbonization, shows that reliability can be very high for a 100% clean grid as long as you have an appropriate varied resource mix.

The added benefits of this aggressive decarbonization were found to create cleaner air and add an estimated 10,000 jobs per year to the local economy, without any material negative impacts on the local economy.

3. Where are we going next? Cities are moving faster than statewide goals and state legislation can move us faster.

As a result of these reports, some utilities are committing to action. The City Council of Los Angeles has not only adopted the LA100 goal to fully procure clean electricity, but also decided they can move the goal post to 2035, 10 years before their expected target.  Similarly, the Sacramento Municipal Utility District’s Zero Carbon Plan is aiming to remove 100% of GHG emissions from their electricity by 2030.  In our district, Peninsula Clean Energy has been working toward a goal of delivering “100% renewable energy each and every hour of the day” by 2025 — equivalent to the SB 100 target of 100% of retail sales, but 20 years earlier!

While local initiatives to decarbonize electricity are a key component of state climate goals, we must not let them go alone: My colleagues and I must also take further legislative action to ease this transition to decarbonizing the grid. My legislation, SB 67, aims to drive this transition to 100% clean electricity statewide, by establishing a 24/7 Clean Energy Standard with incentives and requirements for utilities to purchase clean electricity, even during harder-to-serve times (i.e. when the sun isn’t shining and the wind isn’t blowing). Today, the statewide Renewable Portfolio Standard, which sets the minimum percent of purchased or created energy that must come from renewables, encourages the purchase of whatever renewable energy is cheapest, regardless of when it is being provided and whether that actually helps reduce greenhouse gas emissions from the grid.

My legislation will adjust the requirements in order to encourage the mix of zero-carbon generation sources, energy storage, and demand-side flexibility that we will need eventually to run the grid around the clock — 24 hours  a day, all year long, without power plants running on fossil fuels. This will also increase reliability by adding to our clean energy capacity during the summer evening peaks when we worry about rolling black-outs today.

In summary, between additional legislative improvements, such as SB 67 and others, the pathway to decrease emissions from the electric grid is possible, and we already see local utilities and community choice aggregators signing on to go beyond the state-level goals — moving us closer to Getting to Zero.